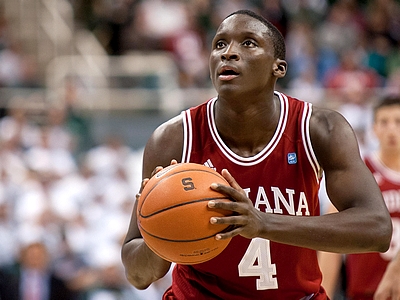 Matt Williams
@DraftExpress
The name on the back of the jersey means just as much as the name on the front here at DraftExpress, so if you're watching the NCAA tournament with an eye on scouting future NBA players, you've come to the right place.

This game will feature a very interesting matchup inside between freshman Georges Niang and junior DeShaun Thomas. Niang hasn't gotten a great deal of attention at the national level, but he's an extremely mature and productive young player who is capable of scoring both inside the paint (57% 2P%) and from beyond the arc (39% 3P%) and posted a positive assist to turnover ratio. Like Thomas, he's somewhat stuck between positions at 6-7 and not possessing great athleticism, but he's an extremely effective all-around player with a high basketball IQ, coming off a very strong Round of 64 game against Notre Dame (19 points, 9-13 FG, 3 rebounds, 4 assists, 1 turnover) . He'll have his hands full with Thomas (24 points in 30 minutes against Iona, 3-3 3P) if their coaches decide to pit them against each other, which will give us a pretty good idea of where Niang stands defensively at this early stage of his career.

Khalif Wyatt had one of the best individual outings of the tournament in the Round of 64, scoring 31 points (8-15 2P, 1-7 3P) with 5 assists and 1 turnover to help Temple beat a very talented N.C. State squad. Things won't get any easier against Indiana, as he'll most likely be pitted against one of the best defenders in college basketball in Victor Oladipo, a very difficult matchup that he stands to benefit greatly from should he manage to persevere. Wyatt is a 6-4, versatile combo guard who can handle the ball, create for others, and shoot from the perimeter. He is a skilled player who isn't drawing a great deal of draft buzz primarily due to his below average athleticism, which hampers him primarily on the defensive end. If he can show that he's still able to be effective against the likes of Oladipo and Will Sheehey, he could certainly open up some eyes and potentially improve his professional outlook.

Christmas day for pundits also makes for a very highly anticipated matchup for NBA scouts. We'll be treated to a rare Round of 32 matchup featuring half a dozen top-100 prospects in addition to the Roy Williams v. Bill Self grudge match. Reggie Bullock will have a major opportunity to give his draft stock a boost when matching up with Ben McLemore, and James McAdoo versus Jeff Withey will be a fascinating contrast of styles as well.

Kansas will likely need Ben McLemore to be a lot more aggressive than he's been thus far in the Big 12 and NCAA tournament. While he's a tremendous athlete and perimeter shooter, some NBA scouts question whether he's too comfortable blending in at times and if he's a good enough ball-handler and shot-creator to warrant consideration as a top draft pick. This type of pressure-packed environment could be a good place to dispel some of those concerns.

While this contest might lack something in the ways of star power, it pits two very experienced coaches and rosters in what should be a very entertaining matchup. At the center position, Patric Young and Trevor Mbakwe are two of the most physically developed and athletic big men you'll find on the college landscape. On the other hand, the matchup at the power forward spot couldn't be any more different between the high-flying but inconsistent Rodney Williams and the underwhelming athlete, but highly skilled stretch four Erik Murphy.

Minnesota point guard Andre Hollins (son of Memphis Grizzlies head coach Lionel) absolutely exploded in the second half of the Round of 64 win over UCLA, scoring 23 points (28 total). It was not all that unlike what he did against his hometown Memphis Tigers earlier this season, where he scored 41 points. Florida's backcourt is clearly their weakest link, so it could be here that the game is decided.

NBA scouts were dreaming of a matchup of first round pick wing prospects between Otto Porter and Jamaal Franklin. Alas, Florida Gulf Coast had other ideas, and the national public will likely be better entertained for it. Franklin had a strong showing in the Round of 64 against Oklahoma with 21 points (6-13 FG), 8 rebounds and 5 assists in what was one of his most efficient performances of the season. Advancing to the Sweet 16 after another good outing will be highly beneficial considering how few first round prospects are still in contention at this early stage should SDSU can send FGCU packing.

Marshall Henderson will seemingly be the only player on the court if you listen to the pre-game buildup or in-game commentary, but it was actually teammates Reginald Buckner and Murphy Holloway who are better pro prospects and were more influential factors in Ole Miss advancing past Wisconsin in the Round of 64. Buckner is especially intriguing at 6-9, with a long wingspan, strong athleticism and tremendous shot-blocking instincts. His matchup with athletic 6-8 big man Jerrell Wright should be very competitive inside the paint.

Backcourt play has been a key to La Salle advancing to the Round of 32 especially that of South Carolina transfer Ramon Galloway, who has scored 40 points in their two games thus far. At 6-3, he's more of a combo than a point guard, and doesn't possess elite athletic ability, even if he's an excellent shooter and a very crafty overall scorer. He's surely helped his professional basketball prospects with his play thus far, and has an opportunity to continue to do so here.

Brandon Paul was one of the hottest names in college basketball after an amazing start to his senior season, averaging 18 points per game on scintillating efficiency (56% 2P%, 42% 3P) in the month of November. His percentages fell off dramatically the rest of the season, as he only made 46% of his 2-point attempts and 30% of his six and a half 3-point attempts per game. A 6-4, powerful and athletic combo guard, Illinois will need him to somehow regain his mojo if they are to have any chance of winning this game. Doing so would probably help reverse the negative momentum of his draft stock at the moment as well.

The Illini will have their hands full with a deep, experienced and talented Miami squad, though, led by sophomore point guard Shane Larkin, who has developed into one of the best floor generals and off the dribble shooters in college basketball. Larkin has made it known that he has not yet closed the door on entering the draft at the end of the season, and he will be scrutinized closely as Miami's best pro prospect.

Kenny Kadji is another Miami player who will be watched closely in this contest, as few players possess his combination of size (6-11), length and skill, as he's capable of scoring both inside and out. Kadji's biggest issue is that at age 24 he is far older than any player he'll match up against, as he was actually born before Kevin Durant, a six year NBA veteran. He also has a tendency to disappear at times, as his energy level tends to fluctuate.

Doug McDermott was described by Duke head coach Mike Krzyzewski as one of the best offensive players I've seen in the last decade this week, which could be a hint at the amount of defensive attention they plan on paying him in this game. Fellow NBA power forward prospect Ryan Kelly will be the one asked to guard him, which should be both a major challenge and extremely informative for scouting purposes. Few NBA scouts question McDermott's offensive prowess, it's his ability to hold his own on the other end of the floor that raise the most concerns, so how he fares against Kelly will be quite telling.

Mason Plumlee is Duke's best pro prospect, and at 7-feet tall with tremendous athleticism there is no reason why his presence shouldn't be felt consistently on both ends of the floor in this game. Questioned at times for his lack of mental toughness, Plumlee has been inconsistent throughout his career, but has seemingly turned the corner this season, something scouts will want to see continue in a game as important as this.

Seth Curry was on fire in the round of 64 against Albany, putting up 26 points (8-12 2P, 2-2 3P) and continuing to show that he can no longer be considered a one-dimensional player. Curry has been battling a shin injury all season and has struggled to remain effective at times without a few days off in between games. With just 48 hours in between games in this Tournament, it will be interesting to see how productive Curry can be.
Read Next...