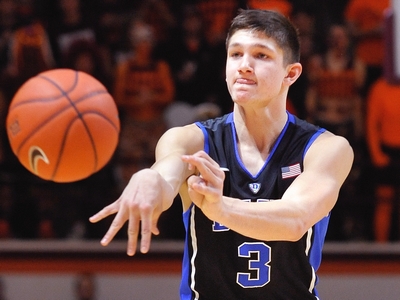 Keep an early eye on how Villanova decides to deal with Miami's outstanding pick and roll offense. Villanova didn't let Iowa even think about getting into their half-court sets on Sunday, mixing in intense man to man ball-pressure with a very active 2-3 zone, spearheaded by their center Daniel Ochefu. Miami has much better ball-handlers than Iowa, and also their own defensive stalwart inside the paint in 7-footer Tonye Jekiri (#94). Both senior big men are from Nigeria, which adds another layer of intrigue to their matchup. Each are vying to show they are worthy of a NBA roster spot this fall.

While both teams like to utilize two point guard lineups that have proven to be very effective, the most intriguing matchup from a NBA standpoint will be on the wing, where Miami senior Sheldon McClellan (#62) will go up against Villanova junior Josh Hart.

McClellan is a difficult cover for any college player, as he combines explosive athleticism with tremendous shot-making ability from anywhere on the floor. The similarly sized Hart is one of the better wing defenders still playing, which will make for a very interesting contrast. Hart is no slouch himself, scoring over 20 points per-40 on terrific efficiency (61% TS%), so he will test McClellan on the other end of the floor as well.

Buddy Hield (#9) in the Sweet 16 is must-watch basketball for any college hoops fan, but there is a lot to glean here from a scouting perspective as well. He'll likely see most of his time matching up with Texas A&M senior wing Danuel House (#87), who has good size, strength and athleticism, but will likely have a difficult time slowing him down. House, who certainly looks the part of a NBA player, has had an up and down senior year, only shooting 31% for 3 after making 40% of his attempts last season. Keep an eye on A&M point guard Alex Caruso (#97), who has good size at 6'5, great toughness and an outstanding feel for the game. He's not a prolific scorer averaging just 8 points per game, but he came up huge in their miracle comeback against Northern Iowa, scoring a career high 25 points including a number of critical plays late in the fourth quarter.

Kansas is one of the most complete teams in college basketball, with impressive depth at every position and tremendous balance on both ends of the floor. Their best players, Perry Ellis (#67) and Wayne Selden (#44), are upperclassmen who are, at best, considered second round picks. They have a number of younger prospects, namely Sviatoslav Mykhailiuk (#45) and Cheick Diallo (#39), who have struggled to carve out major roles this season, but could potentially emerge as first rounders down the road.

The matchup to watch from a NBA perspective is at the power forward position, where Ellis will match up with second round prospects Robert Carter (#57) and Jake Layman (#50). Carter is a long and bulky big man with an impressive skill-level, capable of scoring inside on the block or from behind the 3-point line, but is extremely limited defensively. His ability to slow down Ellis will not only play a big factor in this contest, it will also present a major opportunity for Carter to prove to NBA scouts that he is not as much of a defensive liability as people think.

If that doesn't work, Maryland will likely need to go to a smaller lineup, with Carter at the 5 and Layman at the 4. The 6'9 Layman is a terrific athlete who makes 41% of his 3-pointers, but you never quite know if he'll show up on any given night. He's been increasingly effective as the year has moved on though, demonstrating better toughness and aggressiveness than in the past, so it will be fascinating to see if he can put things together in possibly the most important game of his career thus far.

While the matchups inside are intriguing, the ones on the perimeter between guards Melo Trimble, Rasheed Sulaimon, Frank Mason and Devonte Graham will likely be the ones who decide which of these teams makes it to the Elite 8. After a red-hot start to the season, Trimble has struggled badly to find his jump-shot, which has made defending Maryland that much easier considering their lack of spacing with the bigger lineups they utilize. Kansas' guards don't have great size, but are as quick and tough as you'll find.

A fascinating contest between two undersized, and sometimes defensively challenged teams, this game will pit one of the most underrated tacticians in the college game, Oregon head coach Dana Altman, against one of the most heralded in Duke's Coach K.

All eyes will be on potential #1 overall pick Brandon Ingram (#1), who will see a variety of looks and schemes while being guarded by many different players on Oregon's roster. Altman likes to utilize a very unique matchup zone defense that will shade his two long and extremely athletic big men shotblockers, Jordan Bell and Chris Boucher, towards Ingram for stretches, while using a number of combo forwards, namely Elgin Cook and Dillon Brooks, as well. It will be very interesting to see how the highly touted 18-year old freshman reacts in such a high-pressure environment, as he hasn't always been quite as aggressive looking for his own offense as Duke may have needed from him at times.

Oregon will need another big outing from sophomore Dillon Brooks, who carried them in key moments in the Round of 32 against St. Joe's when their offense broke down. The Canadian small forward and Pac-12 leading scorer is one of the most versatile offensive players in the country, capable of making 3-pointers, scoring with his back to the basket, and creating his own shot from the perimeter. His short wingspan and average athleticism will likely always render him a second round prospect, but he has a lot to gain with a strong outing on this platform. He's rumored to be heavily leaning towards entering this year's draft.

Keep an eye on Jordan Bell, who is a very limited offensive player that lives mostly off opportunities created for him around the rim by his guards. But with that said, you'd be hard pressed to find a more athletic or versatile big man defensively, as he's capable of absolutely hounding smaller players on the perimeter with his quickness and length, but also has great timing around the basket. He's one of just two players in college basketball to average over 2 steals and 2.5 blocks per-40 minutes. He could be a difference maker against someone like Ingram.
Read Next...