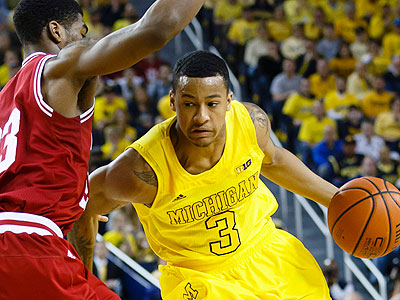 Matt Williams
@DraftExpress
The name on the back of the jersey means just as much as the name on the front here at DraftExpress, so if you're watching the tournament with an eye on scouting players who will eventually play in the NBA, you've come to the right place.

Potential Wooden Award winner Trey Burke had a somewhat underwhelming showing against Nate Wolters and South Dakota State, being bothered more than expected by his superior size, and shooting just 2-12 from the field. Another intriguing matchup awaits him in the second round against VCU's vaunted havoc defense, which will test Burke's ball-handling and poise by pressing and trapping him all over the court. This should make for compelling basketball, hence the time-slot allotted by CBS.

Glenn Robinson and Tim Hardaway combined for 42 points on 16-22 shooting (8-10 3P) against South Dakota State, and both have a chance to help themselves further with another strong showing.

VCU's Briante Weber leads the NCAA in steals per-minute, getting in the passing lanes an outrageous 4.9 times per-40 minutes. While his offensive game is rudimentary, he has a chance to increase his notoriety against the best point guard in college basketball, which represents a major opportunity for him.

Two of the most athletic teams in college basketball go head to head, which could lead to a very entertaining, or a very ugly, contest.

Derrick Nix had one of the best Round of 64 performances of anyone, exploding for 23 points and 15 rebounds in just 28 minutes against Valparaiso. He will face a considerably bigger and stronger frontline against the likes of Tarik Black and Shaq Goodwin, both considered fringe NBA prospects at the moment, like Nix.

Memphis point guard Joe Jackson had some strong moments against St. Mary's in the previous round, before coming apart somewhat at the seams later on in the game, like Memphis' entire squad. He will need to have a steady showing running the show for the Tigers, while also using his trademark blow-by quickness in transition.

Undersized power forward D.J. Stephens stands just 6-5, but is one of the most explosive leapers in the NCAA. He was very impressive against St. Mary's with 8 blocked shots. He'll likely need to show at least something resembling an offensive game to have any chance of being considered a legitimate NBA prospect at his size. His matchup with Adreian Payne, who is just as long and nearly as athletic, but stands 6-9, will be interesting to watch on the interior.

Colorado State flew under the radar for most of the season, not really beating anyone notable outside of the Mountain West Conference. They handled Missouri with relative ease, though, which gives some hope that their 7th ranked offense (KenPom) can at least put up a decent fight against the #1 defense in college basketball.

The most intriguing matchup of this game will be at the center position, as the bulky 6-11 Colton Iverson goes head to head with Gorgui Dieng. Both are 23 years old and mature prospects physically and skill-wise, who rebound ferociously and compete admirably inside. Iverson has come on lately and has an opportunity to really improve his standing as a prospect with a strong showing here, as he rarely gets to match up with big men of Dieng's stature in the MWC.

Arsalan Kazemi grabbed 17 rebounds (six offensive) in 31 minutes against Oklahoma State, which certainly played a major role in Oregon's upset win. There will be plenty of available rebounds to be had against St. Louis, who sport the 6th best defense in the NCAA according to KenPom, so Kazemi has a chance to show off his best skill in another major platform.

Vander Blue is one of the most athletic guards you'll find, but is still likely a jump-shot away from being considered a viable NBA draft pick. After making the game-winning basket to sink Davidson, Marquette will need another strong outing from him against Butler. Davante Gardner led the Big East in PER, but is an extremely undersized center without great athleticism, even if he does have excellent hands and touch. Butler's Andrew Smith did an excellent job of containing Mike Muscala in the Round of 64, so it will be interesting to see how he fares against Gardner.

Kelly Olynyk helped Gonzaga survive a scare against #16 seed Southern in the previous round, and his team will need another strong outing against a tough, aggressive, yet undersized Wichita State frontcourt. Olynyk's ability to score both inside the paint and out on the perimeter creates major mismatch problems for opposing defenses to handle. Gregg Marshall's squad will surely try to slow down the tempo and ugly up the game to try and sneak out a game against a much more talented opponent. Oregon transfer Malcolm Armstead was very good against Pittsburgh (22 points, 5 assists, 1 turnover) and another solid showing can only help his professional basketball outlook.

The last game of the day should be one of the most interesting from a NBA standpoint, as well as possibly the most entertaining. Allen Crabbe had a very strong performance in Cal's upset win over UNLV in the previous round, and he'll be scrutinized closely to see how wisely he's able to attack Syracuse's vaunted 2-3 zone. 6-6, with a strong first step and excellent scoring instincts, Crabbe is criticized at times for his lack of toughness defensively and general lackadaisical approach. He might see some minutes guarding the other top NBA prospect in this game, 6-5 point guard Michael Carter-Williams, who had no problem helping Syracuse bulldoze their way through the round of 64 with a 81-34 victory over lowly Montana. NBA scouts say they want to see better decision making skills from Carter-Williams than he was able to display at some key junctures of this season before they're fully on board with him as a lottery prospect, and this is would be a great place to start.
Read Next...