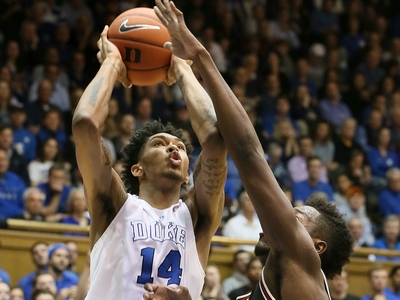 Coming off strong performances in the Round of 64 against Buffalo and Arizona respectively, Sheldon McClelllan and Ron Baker will face off in a matchup of two of the elite shooting guards in the NCAA senior class. With no competing games and all eyes focused on them, this is a great chance for both players to show they are better NBA prospects than they've been given credit for up until now.

Baker, fresh off locking up Arizona freshman Allonzo Trier, has developed into an outstanding collegiate defender with his long 6'9.5 wingspan, improved frame and consistent effort level. He'll have his hands full with McClellan, who is taller, more athletic and one of the most prolific shot makers you'll find, featuring range well out to the NBA 3-point line, and the ability to pull-up off the dribble with no conscience. McClellan will also likely need to slow down Baker, an extremely intelligent passer and secondary ball-handler, which is no easy task. Baker's shooting (2-11 3P in NCAA Tournament, 35% as a senior, 36% career) has been hit or miss throughout his career, and considering his average size and projected role, that is certainly something NBA teams will be keeping an eye on.

Yale led from start to finish over a very good Baylor squad in the Round of 64, matching them physically and getting a huge shooting performance from sophomore point guard Makai Mason. They'll need more of the same to hang with a shallow but very talented Duke team. Brandon Ingram will have a significant quickness advantage at the power forward position against Yale senior and Ivy League player of the year Justin Sears, and scouts will want to see how he follows up a very strong performance against UNC-Wilmington, where he displayed his talent very vividly.

It's somewhat odd to see the Big Ten champions facing off against the SEC Tournament champions on the first weekend of the NCAA Tournament, but few outside of Bloomington or Lexington will complain about this (certainly not TV executives). This is the clear-cut headliner of the day from a scouting standpoint, for the national media, and even from the perspective of casual fans, pitting not only two of the most storied programs in college basketball history, but also two of the most talented and entertaining teams in the country this season as well.

Most of the national headlines will revolve around the matchup between diminutive floor generals Yogi Ferrell and Tyler Ulis, and rightfully so. Both point guards have had phenomenal seasons, and any success their teams find will revolve heavily around what they are able to offer as playmakers and scorers. Just as important from a NBA perspective is the matchup inside between freshmen big men Thomas Bryant and Skal Labissiere. Bryant has been more productive and consistent on the season overall, while Labissiere has superior physical tools, especially for the defensive end. He was extremely effective in the Round of 64 against Stony Brook, dropping some flashes of talent on both ends of the floor.

As we forecasted in our Thursday preview, Arkansas Little-Rock senior Josh Hagins had his national breakout performance in a timely upset win over 5-seed Purdue. The lanky, shifty point guard started off slowly, but showed incredible poise down the stretch, making big play after big play in the most important moments of the game, and in the process elevated his name into the conversation as a March Madness darling and potential sleeper for the next level.

Can Hagins continue his upward trajectory and take his team to the Sweet 16? He'll have to be a little more aggressive from the start against a far more potent offense, and will have a much better matchup from a scouting perspective going up against one of the top point guards in the country in Monte Morris. The contrasting evaluation between the two should help him continue to demonstrate why he deserves to be considered a NBA prospect. Like Morris, Hagins isn't the tallest or most athletic point guard you'll find, but has a nice blend of playmaking and shooting ability, particularly off the dribble. Hagins has shown a sense for the moment throughout Little Rock's storybook season, and they'll need more of that from him to cement themselves as this year's Tournament Cinderella.

Fresh off of a 36-point win over 16-seed Hampton, Virginia will face a more daunting challenge in their round of 32 matchup with the Butler Bulldogs, who rode a strong second-half to a 10-point victory over Texas Tech in what wound up being a fairly competitive 8-9 matchup. Kellen Dunham poured in 23 points going 5-9 from 3 in the win, continuing his streak of strong shooting performances. A career 43% 3-point shooter over his four year college career, Dunham has been streaky at times, but has made 60% of his shots from beyond the arc in Butler's four games in March to this point. The senior will need to have a big game for the Bulldogs as Virginia's defense will clog the lane and force Butler to make jump shots. The contrast in styles between Dunham and the strong, versatile Kelan Martin will provide a nice test for Malcolm Brogdon on the defensive end as he figures to be matched up on both for stretches on Saturday.

Brogdon played 28 minutes on Thursday often deferring in what quickly became a blowout. The Cavaliers got 19 points from 6'8 power forward Anthony Gill who, after struggling throughout February, appears to be back on track, using his athleticism to finish explosively inside. Gill, and 6-11 center Mike Tobey, will play a key role for Virginia in this game as they'll enjoy a considerable advantage inside in terms of size, athletic, or both depending on who the Bulldogs have on the floor.

Kansas is loaded with second-tier prospects, and for second-tier prospects to emerge, winning and production is paramount. Starting forwards Perry Ellis and Wayne Selden are important cogs in Kansas' well-oiled offense, but their ability to slow down UConn's star Daniel Hamilton is one of the big things NBA scouts will be watching. Hamilton has the skill-set of a shooting guard, with his ability to create his own shot, play pick and roll, find the open man, and make perimeter jumpers. His average athleticism, which is reflected in his low 2-point percentage and his struggles finishing plays around the paint, is what pushes him more towards the forward spots in the college game, and his outstanding rebounding prowess and overall feel for the game frequently gives UConn an advantage even with him operating as a small-ball power forward (which Ellis will need to deal with).

Another thing to keep an eye on is Sviatoslav Mykhailiuk, Kansas' first wing off the bench in their blowout victory over lowly Austin Peay. The 18-year old Ukrainian had possibly the best game of his career thus far, scoring 23 points in 24 minutes on 9-11 shooting. Will Mykhailiuk continue along those lines against UConn? Or was that just a flash in the pan against a bottom-tier opponent?

International centers Jakob Poeltl and Domantas Sabonis go head to head in what will be an extremely interesting matchup for NBA scouts. The two have some experience going up against each other, facing off with their respective senior national teams in an exhibition game and at the Nike Academy last summer. Sabonis' physicality and toughness will provide a great baseline to evaluate the taller and more skilled Poeltl as both teams will look to get their big men involved early and often on the block. Opportunities to see mature NBA big men prospects competing against each other are few and far between, so there will certainly be some things to take away from this. Sabonis has traditionally struggled with bigger and longer big men, as his skill-level and feel for the game aren't as advanced as Poeltl, so it will be very interesting to see how the Lithuanian handles the Austrian 7-footer. This is a rare matchup with global appeal as two of the best young European players in the world face off on the NCAA Tournament stage.

In possibly the last game of his college career, Kris Dunn faces arguably his biggest test yet, a matchup against possibly the most talented team in college basketball. Dunn did not have his best outing in the Round of 64 against USC, and has been trending downwards for some time now after an incredible start to the season, so he will want to go out on as strong a note as possible in a game that his team will almost certainly be overmatched in. Interestingly, North Carolina does not have a great matchup for Dunn, as both of their starting guards, Marcus Paige and Joel Berry, lack much in the way of height, length or strength compared with the physically imposing Dunn.
Read Next...