Big Board of Top 115 NBA Draft Prospects, by Position, w/Analysis 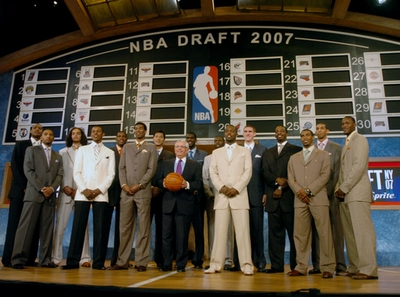 Now that we have almost a complete picture of who is in and out of this year's draft, we can more accurately assess what lies ahead of us over the next 60 days leading up to June 26th. With that in mind, we've ranked the top 115 NBA prospects and sorted them by position, 20 points guards, 20 shooting guards, 20 small forwards, 30 power forwards, and 25 centers--reflecting the depth of each position in this class.

It's easy to estimate that the top three players from each position will land in the lottery and the top six will make up the first round, but history shows us that that's not always quite the case. How will this year's obscenely deep center class affect the way teams approach the draft on June 26th?

Methodology:- The averages stated below reflect the number of lottery and first round picks each position has produced over the last 10 years, compared with how things currently stand on our 2008 mock draft. This is just an initial projection obviously, as things will still change quite a bit after the NBA pre-draft camp and private workouts are conducted.

As always, when attempting to project a players position for the next level, we usually consider the position that player will likely defend on the floor, and try to stay within reason of what that player showed during their time in college.

Darren Collisons surprising last-minute decision to return to school takes one likely first round point guard out of the picture here, but this is still a pretty decent class of playmakers, especially after last years dud of a group (so far). The top three players all look like solid starters at the very least, with Rose having franchise building potential and Bayless looking like a possible 20 point per game scorer down the road as well. Russell Westbrook may be considered more of a combo guard by some teams, but still looks like a solid late lotto to mid-first pick, while two other hybrid guards in Mario Chalmers and Lester Hudson will try to battle their way into the first round. Ty Lawson is holding on for dear life at this point, and could lead an exodus of players returning to school once the reality regarding the depth of this draft sets in. Whats interesting is that you wont find a single senior in this group until all the way down at 14, Sean Singletary, who will probably be happy to get drafted at this point.

The shooting guard spot offers up a lot more question marks than answers at this point, continuing a trend weve seen over the past few years of extremely weak crops of 2-guards at the top end of recent drafts. Last years draft might not produce a single substantial starter at this position, and 2006 was fairly underwhelming as well beyond Brandon Roy. The 2005 first rounds best shooting guard? Probably Rashad McCants, which isnt saying too muchTwo freshmen shooting guards this year look certain to be selected in the top 10, but no one is quite sure if theyll indeed end up spending most of their minutes at that position, which is part of the problem. There is a lot more age and experience after that, and we should actually see a nice group of role players and specialists emerge from this crop. Things are pretty wide open in the 3-7 slots of the rankings, and thus we might see all of the players here participate at the Orlando Pre-Draft camp, with there being plenty of room to move up into the first round based on team needs alone if someone is able to string together a strong showing.

This appears to be a solid class of small forwards, particularly when you consider the size and versatility most of the prospects here bring to the table, which is what many teams covet from that position. There is a good mix of outside shooters (Budinger, Rush), athletes (Batum, Walker), and potential (Greene, Alexander), as well as various combinations. The two top international prospects in this draft come from here, although they probably couldnt be any different from each other. Things get dicey pretty quickly towards the end of this list.

Potential is the operative word here, with three freshman at the top, then one sophomore, followed by an 18 year old international player. Uncertainty is definitely another theme here as well. Michael Beasley looks like a franchise-changing talent on first glance, as long as he is able to stay grounded and not resort back to the way he often played in high school. Anthony Randolph is one of the bigger wildcards in this draft, as his physical tools and talent are off the charts, but there are also many questions about how ready he is to handle things on and off the court. Its not easy to find much of a consensus around Kevin Love at this point either. Darrell Arthur is largely an enigma himself, while Serge Ibaka is probably 2-3 years away from stepping on an NBA floor, and might very well still pull out of the draft altogether in June. J.J. Hickson? Davon Jefferson? Good luck finding two scouts with the same opinions here either. The point here is, there is a lot still to be decided about how these players rank, and its not out of the question that someone ends up with a huge bust very early or a huge steal drafting late.

Fewer centers get drafted in the first round each year compared with any other position on average, but if early indications mean anything, things are going to be very different this time around. No less than 9 centers are currently projected to be drafted in the first round, which would be an all-time high over the last 10 years. Over the last five years in fact, no more than four centers were ever drafted in the first round in a single year, which has led many coaches and organizations to redefine the way they think about the center position. What is odd about the 2008 center crop is that there isnt anything even remotely resembling a sure thing outside of the consensus #1 player Brook Lopezwe instead find a group of incredibly young, raw, immature, inexperienced players, often showing great physical tools and talent, but also with considerable flaws. Again, youd be hard pressed to find two teams out of the 30 out there that would rank the top 17 centers on our board in the exact same orderbeauty is in the eye of the beholder as they say. Almost anyone can slip into the top-20, and a significant portion of them will slide into the second round, just because of the sheer numbers involved. Luckily, most of the underclassmen/internationals are still holding onto their collegiate eligibility/draft cards. It will be fascinating to see how many will end up playing at the Orlando pre-draft camp, and workouts should play a pretty strong role in how things play out. When it's all said and done, this might be a great year for a team drafting in the bottom half of the first round to swing for the fences and take a chance on the project big guy they like the most, since it could really pay off for them down the road. As we all know, 7-footers don't grow on trees these days.