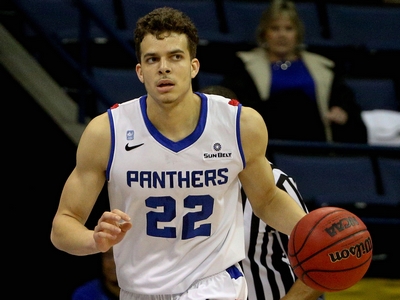 This will likely be a reasonably high scoring game between two skilled teams with shooters at every position. Jerian Grant should be able to carve up Northeastern's 170th ranked defense.

UAB rode home-court advantage in their conference tournament to a NCAA berth despite a relatively average season. Iowa State will be looking to make a long NCAA run with their versatile and experienced roster.

Georgia State, not Baylor, will have the most talented player on the floor in coach's son R.J. Hunter. His outside shot has been very streaky this year, but he has the range to pick apart Baylor's zone if they decide to rely heavily on it. Baylor has been getting huge contributions as of late from versatile and sweet-shooting 6-7 small forward Taurean Prince, who slides between the forward positions and makes a huge impact on both ends of the floor. A strong tournament could help him increase his notoriety significantly. Ricardo Gathers ranks among the best offensive rebounders in the NCAA and should be able to feast inside against one of the worst defensive rebounding teams in the country. Baylor spaces the floor extremely well, often playing four shooters at the same time, which will make things very difficult for Georgia State.

Texas Southern showed it can play with the big boys already, knocking off Michigan State and Kansas State in their out of conference slate, which is why they aren't a 16 seed as SWAC teams usually are (every year since 1999 in fact). Their #1 option, Chris Thomas, was once considered a top-5 recruit by some services before bouncing around many different high schools, prep schools and colleges, decommitting and recommitting as often as some people change socks. Arizona's offense is hardly a thing of beauty, which could make for somewhat of an interesting game if Texas Southern uncharacteristically is able to make outside shots.

Despite being an 11 seed, Texas is favored by a point a half according to Vegas, a reflection of just how talented a team they are and how much they underachieved this season. It will be interesting to see if Texas' players can put individual agendas to the side for an afternoon and finally come together as a team. Their frontcourt has unbelievable size, length and strength for a college team, which should be a huge advantage against an undersized team like Butler who is not particularly athletic, but Rick Barnes has had a difficult time managing his rotation in an optimal way. Projected lottery pick Myles Turner has only played 38 total minutes in Texas' last three games. Will he find a way out of Rick Barnes' doghouse?

SMU has a significant size and experience advantage over a UCLA team that few projected to make the tournament on Selection Sunday. 6-11 Angolan Yanick Moreira has had a strong senior year and will want to take advantage of the many NBA scouts watching this game tuning into possibly see Kevon Looney's final college outing. Looney hasn't played particularly well against Pac-12 competition, and getting dominated by a pair of 23-year olds won't help his draft stock. UCLA's long and ultra-athletic senior guard Norman Powell has been coming on strong as of late and surely won't want to see his college career end here.

Many feel that Xavier was overseeded, which could make for a very even matchup here. Ole Miss has just as much talent.

All NBA eyes will be on Portland to see how D'Angelo Russell fares against VCU's press, which isn't as feared as it once was since the team's best defender, Briante Weber, went down with an injury. Treveon Graham is another player to keep an eye on, as the powerfully built senior forward has made strides as an outside shooter and could find his way onto a NBA roster when it's all said and done. Ohio State's point guard Shannon Scott has NBA tools and is one of the best perimeter defenders in the college game, and is also a very steady distributor. His lack of scoring ability will probably keep him from getting drafted, but like Graham, he could end up making a NBA team at some point.

Darrun Hilliard is one of the most underrated players in college basketball. At 6-6, with good physical tools, a solid outside stroke, and excellent defensive ability, he could easily find his way onto a NBA roster at some point. Can Villanova cover the 23 point spread?

Many NBA scouts gave up on A.J. Hammons after two and a half seasons of lethargy and underachieving, but the Purdue 7-footer found a way to rev his motor up somewhat once Big Ten action started. Purdue will need him to play hard against Cincinnati's extremely tough and competitive frontcourt. 6-7 small forward Vince Edwards had some nice flashes for Purdue over the course of his freshman season, and could be someone to keep an eye on in the future.

This is a major opportunity for versatile Harvard wing Wesley Saunders to show he belongs against a plethora of NBA prospects. His team will need him to make outside shots, and scouts will want to see how he looks shooting the ball from the perimeter with someone like J.P. Tokoto in his face. While they will certainly try to slow the pace of the game, it may be difficult for Harvard to score enough to keep up with North Carolina's high-powered offense, especially if Kennedy Meeks is back to full strength and beasting on the offensive glass.

Stephen F. Austin is a very small team, so it will be interesting to see if Jakob Poeltl can impose his will inside the paint and on the offensive glass. The Austrian 7-footer has been very inconsistent as a freshman, but scouts will want to see him be productive against a low-major team like this. Utah's point guard, Delon Wright, is nearly as big as SFA's center.

Two of the most inconsistent teams in college basketball match up, both of whom surprisingly beat top teams and inexplicably lost to bottom-feeders, which should make for a very entertaining contest. Neither team is particularly disciplined or organized, but both squads have athletes and talent. Potential first round pick Jarell Martin got off to a slow start this season, but was excellent in SEC play.

Syracuse beat Montana 81-34 in the 2013 NCAA Tournament, which broke the record for the most lopsided win in tournament history. The biggest question mark of this game will be whether Kentucky can exceed that feat.

Arkansas plays at the 9th fastest tempo in college basketball, according to KenPom, while Wofford clocks in at 316. It will be very interesting to see how Wofford reacts against Arkansas' press, and whether this game ends up being closer to 60 or 70 possessions. Wofford is one of the smallest teams in the NCAA Tournament, which is something potential lottery pick Bobby Portis, among the most efficient post scorers in the country, will look to exploit.

The biggest question mark of this game might be how long it takes until Tyler Harvey's name is trending on Twitter? Harvey ranks as the #1 off the dribble shooter in college basketball, making 51% of his pull-ups for an outrageous PPP of 1.373. The 6-4 shooting guard is a Lou Williams-esqe microwave at the college level. A strong showing against a respected team like Georgetown could do wonders for his NBA Draft stock, as the only other tournament team Eastern Washington played this year was Indiana (a game they won at Assembly Hall).
Read Next...